She is an English actress who has had notable roles in both British, United States and Portuguese productions.

In Showtime’s period drama The Tudors, which aired in 2009-2010, she played the historical character Jane Seymore, who was Queen of England from 1536 to 1537 as the third wife of King Henry VIII.

In the BBC drama TV-show Peaky Blinders, which aired in 2013-2016, we can see Wallis as Grace Shelby née Burgess, an Irish Protestant woman and former undercover agent. Peaky Blinders is a crime drama primarly set in Birmingham in the aftermath of World War I.

On the big screen, Wallis starred as Mia Form in the 2014 supernatural horror film Annabelle, a prequel to The Conjuring (2013). In the 2017 action adventure The Mummy, Wallis starred alongside Tom Cruise in a largelly panned reboot of The Mummy franchise, where she played an archeologist connected to U.S. Army sergant Nick Morton (Cruise). 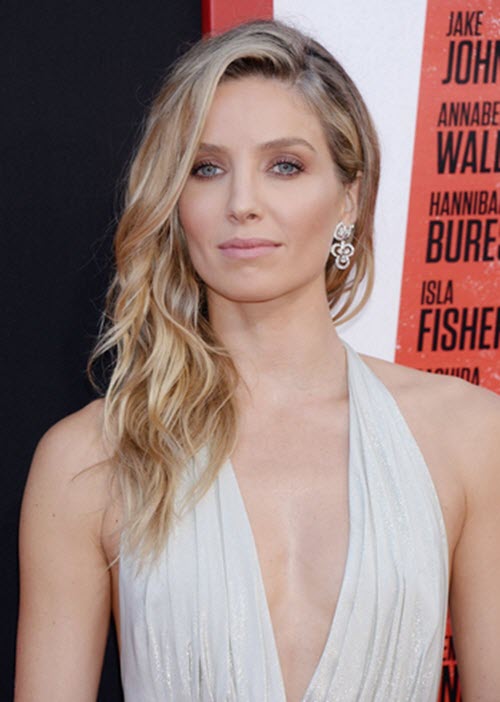 Annabelle Wallis was born in Oxford on 5 September, 1984.

She is English, but also speaks fluent Portuguese, French and Spanish.

Wallis comes from a family of actors. The Irish actor Richard St. John Harris (1930 – 2002) was her materal uncle, and his sons – the actors Damian Harris, Jared Harris and Jamie Harris – are thus her cousines.

When the Icelandic actress Anita Briem quite the Showtime drama series The Tudors after completing its second season, her role as Jane Seymore was recast with Wallis. She appeared in several episodes in the third season, and then made a guest appearance in a dream sequence in the fourth season.

Wallis’ film career started in Portugal, where she appeared in several short films before moving to London to pursue a career in British films. In London, she worked doing advertisements, and found an agent.

In 2005, she was cast in the leading role of Sophie Besson / Savirti Pradhan in the Bollywood film Dil Jo Bhi Kahey… (Whatever The Heart Says…).