Jeff Tomsic is a film producer, writer and director from the United States, know for his comedic work in both film and television. His feature film directorial debute was the movie Tag, which premiered in 2018.

In 2010, he directed the 4 minute long musical film Tickle Monsters ARE Robots!. Tomsic’s short film I’m Having a Difficult Time Killing my Parents debuted at the Sundance Film Festival in 2011, after which he was attached to several film projects that never came to fruition. Simultaneously, he worked as a director and executive producer on the Comedy Central TV-series Idiotsitter and This is Not Happening.

Tomsic is also behind multiple episodes of the critically acclaimed scripted series Broad City and the TBS comedy series The Detour.

The show follows Brown, a recent Harvard graduate who, desperate for money, accepts a nanny position with a rich family in Los Angeles. The ”child” that she is supposed to watch turns out to be Russel, an young adult woman who has been placed under house arrest.

In general, Idiotsitter recived favorable reviews. On Rotten Tomatoes, Season 1 of the TV-series holds an 89% approval rating, based on nine reviews with an average rating of 7.25/10.

This is Not Happening

This is Not Happening is a Comedy Central storytelling series featuring a roster of comedians who recount outrageous true life tales in front of a live audience. The show was originally hosted by Ari Shaffir, who was later replaced by Roy Wood Jr for the fourth season.

So far, four seasons has aired on Comedy Central.

This is Not Happening started out as a live show, before becomming a web show, and then a TV-show. The first season to air on TV (in January – March 2015) was Comedy Central’s first ever series to be adapted from CC’s digital department to the CC cable network. 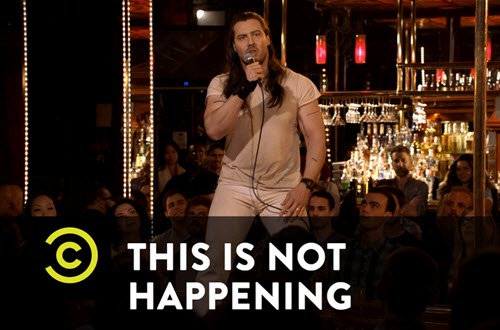 2009 Handjobs for the Future (Short film)