In the 2018 movie Tag, Rashida Jones playes Cheryl Deakins, the high school crush of both Bob and Chilli, two of the men involved in the long-running game of tag.

Jones is an actress, writer and producer working with both fiction and documentaries. Among other things, she is know for her roles in the TV-series Boston Public, Parks and Recreation, and The Office (U.S.version).

Rashida Jones was born in Los Angeles in 1976 and grew up in the afluent Bel Air neighborhood. 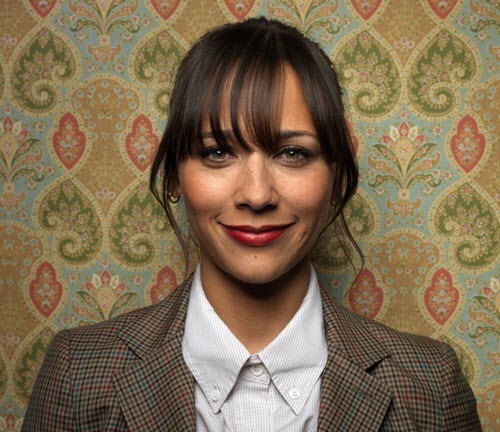 As a child, Rashida Jones liked to read books, sing, play the piano and use computers. She attended The Buckley School in Sherman Oak, California where she made the National Honor Society and was involved with theater.

After their parent’s separation, Kidada stayed with their father while Rashida moved with their mother to Brentwood, another affluent neighborhood in Los Angeles.

After high school, Rashida Jones attended Harvard University where she studied religion and philosophy, and graduated in 1997. At Harvard, she was a part of the Hasty Pudding Theatricals, the Harvard Radcliffe Dramatic Club, the Harvard-Radcliffe Opportunes, the Signet Society, and the Black Students Association. One example of a theatre piece in which Jones performed while still in college is Ntozake Shange’s highly acclaimed play “For for colored girls who have considered suicide / when the rainbow is enuf”.

Examples film appearances from her early career are If These Walls Could Talk 2 (2000), Full Frontal (2002), and Now You Know (2002). After leavin the TV-series Boston Public, she landed a role in Death of a Dynasty, a satire of the hip hop music industry.

Other examples of films where we can see Jones:

In 1997, Jones appeared in The Last Don, a mafia-themed miniseries based on Mario Puzo’s novel of the same name.

Between 2000 – 2002, she appeared in 26 episodes of Boston Public, where she portrayed Louisa Fenn, the sassy high school secretary who briefly dated Milton Buttle.

Other examples of shows in which we can see Jones are Little Black Book, NY-LON, and Wanted (a TNT police drama).

By the mid-2000s, Jones were contemplating to go back to school to study public policy, but decided to stay with acting when offered the role of Karen Filippelli in the United Staes version of the mockumentary The Office. She can be seen in the seasons 3 – 5 and 7.

In Parks and Recreation, also a mockumentary, Jones played the nurse Ann Perkins from the first episode to midway through season six, and then returned again for the final episode.

Jones has appeared in several online comedy series. She did for instance star in Funny or Die’s Speak Out alongside Natalie Portman, and guest-starred in two episodes of Web Therapy. In Prop 8 – The Musical, she satirised California’s anti-gay marriage initiative. She has also voiced Hotwire in the comedy series The Awesomes.

Exemples from Jones career as a writer/creator: